Koi Tū | The Centre for Informed Futures findings through University of Auckland show early screening could combat serious problems for parents and their babies later on.

The study states that this ‘is thought to affect at least 15% of New Zealand women, although this figure obscures the heightened risk among women of Māori, Asian, and Pacific ethnicity, for whom rates can reach one in three.’

We at PADA are in full agreement with the research by Koi Tū | The Centre for Informed Futures. After years of listening to perinatal health care providers, such as midwives and wellchild nurses, and to mothers and their families, we know that there is an urgent need for early screening for all mums/birthing parents in Aotearoa. We know the numbers of mums/birthing parents (and many times dads/partners) affected by perinatal distress is only increasing. We see parents affected by depression and anxiety which is impacting their lives and that of their whānau, and who could have been in a much better place if there was early intervention. We also agree that the screening tool we currently use, the Edinburgh Postnatal Depression Scale (EPDS), considered the gold standard internationally, is not good enough for many of our ethnic groups in Aotearoa. Beyond that, we believe that no matter what screening tool is used, we need to make sure we know how to establish rapport with our families, and know how to ask difficult questions, after building trust. This is something we try to do at PADA constantly: train providers to know how to ask questions, and to screen as early as possible.

Thanks to Koi Tū | The Centre for Informed Futures for the valuable research they undertook on perinatal mental health. There is such a lack of research in Aotearoa New Zealand around perinatal mental health, especially given our unique cultural diversity, where Māori, Pasifika and Asian families are disproportionately represented.

Full transcript to the interview above.

Ingrid Hipkiss | Newshub: Kiwi Researchers are pushing for universal mental health screening for pregnant women and new mothers. The University of Auckland findings show early screening could combat serious problems for mothers and babies later on. The study’s author says at least 15% of New Zealand women are affected by mental distress during pregnancy, and up to a year after giving birth. That number rises to one in three for Māori, Asian and Pacific women. For more on this lets bring in Liora Noy, a registered nurse who runs breastfeeding and parental support clinics in Wellington. She’s also with PADA – Perinatal Anxiety and Depression Aotearoa. Kia ora Liora, thanks very much for joining us tonight. What is your big takeaway from the study, because there is quite a bit to digest here?

IH: So this can actually show up when a woman is pregnant, not necessarily after they’ve given birth?

LN: Oh, definitely. We have a lots of anxiety and depression, perinatal distress among pregnant woman. Definitely.

IH: Can you tell us, just walk us through briefly, how that perinatal distress can show up for people?

LN: So it’s quite, I mean, being pregnant would induce anxiety in any person, because it is a whole new situation and a whole new concept you have to kind of grasp with, but we do get worried when a mum or a birthing parent has issues with connecting to their baby in the womb, in utero. So kind of issues with bond and attachment. We do get worried when parents start asking a lot of questions all the time. So kind of questioning everything, seeking support and reassurance for every little thing; when they stop sleeping, when they stop eating, somehow when they’re really sad, weepy, crying a lot, when they lose any kind of enjoyment and things that they used to enjoy before. All those would be red flags and something is not quite right.

IH: The study found that current screening isn’t adequate. So what are the shortcomings there?

LN: The current screening that we use, there’s two issues. One is that we’re not using enough the one that we have. So we do have a screening tool that’s validated internationally, it’s a gold standard, that’s the Edinburgh Postnatal Depression Scale. But we do feel that it’s not really appropriate for many of our ethnic populations in New Zealand, especially for Māori, but also other groups. We also have an issue that even the one that we have is not actually used enough so we are supposed to be screening every woman antenatally at least two or three times during pregnancy and we’re not doing that.

IH: Just quickly, what would your message be to pregnant women or women who’ve just given birth, who think they might be experiencing this?

LN: To seek support as soon as possible, to find a group of other women like them. So to normalise things that actually what they’re going through is normal in some ways. The challenges in the beginning, but if they feel it’s beyond normal to seek support, especially support as soon as possible; talk to your GP, talk to your midwife, talk to anybody who’s gonna listen and refer you on to somebody who can actually support you.

IH: Great advice. Thanks very much for your time tonight. Thank you.

Watch the video in full here. 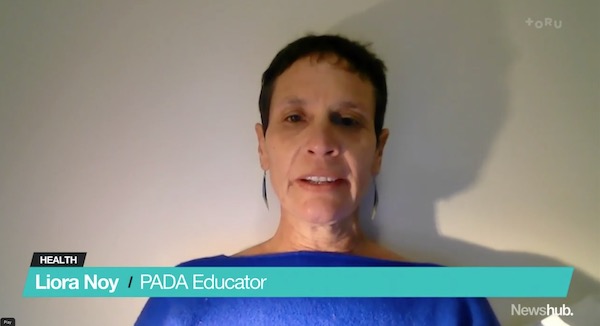